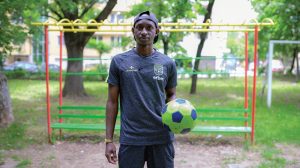 Mohammed is 21 years old and came to Bulgaria after a long and dangerous trip from Africa. He left Mali after the murder of his father who died during the Islamist raids in the country. His family was in danger and Mohammed decided to go to Serbia not just save his life, but also to make his dreams come true: to become a professional footballer and to study at a university. After several unsuccessful attempts to settle there, he went to Western Europe, but his journey led him to Bulgaria.
The first months in the country were hard for Mohammed as he was detained in the closed-type facility in Busmantsi without the right to go out, study or work. He spent eight months there and met Bulgarians who became his new family. An interpreter from the center helped him get out and start a normal life.
Today, Mohammed is a contracted player in FC Vitosha (Bistritsa), also known as Bistritsa Tigers, and will soon play his first professional football match. He wants to study Business Administration and Marketing.