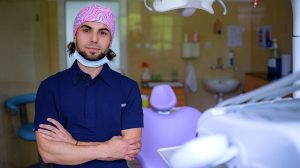 Koja, as his friends call him, left Aleppo in 2010 and went to Turkey, believing that he would stay abroad only for a few months until the situation would calm down. He observed with pain what was happening in his home country and realized that he would never be able to return. In Turkey he spent three years studying and working. In 2013 he decided to come to Bulgaria and despite the language barrier he managed to enroll as a regular student at the Medical University in Plovdiv. In 2019 he successfully graduated in Dental Medicine.
Besides becoming a professional dentist, Koja has another dream – to participate in the 2020 Olympics in Tokyo as part of the Refugees Olympic Team. In Syria he has won medals from national swimming and football competitions. After arriving in Plovdiv, he couldn’t continue practicing his favorite sports and he started running and boxing. Koja is now part of Botev Athletics Club (Plovdiv), where he is tirelessly pursuing his goal and is ready to reach the Olympic Stadium and prove to the world that refugees are people who can achieve great results and that Bulgaria is a country that gives them a chance to develop.
He feels it is his personal duty to help Bulgarian society and to support other people in need who have difficulties. He works as a volunteer and founded a foundation supporting refugees called ‘Help Those in Need Charity’. Since 2015 he has organized many charity events, raised funds, and collected clothes and other essential items supporting people in need.