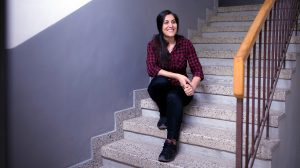 Her name means “smart”. Farasat is an architect with completed projects for sports, residential and office buildings. She chooses a male-dominated occupation in a country where women are expected to be housewives and often do not get the chance to even attend school. When she was a kid she dreamt of becoming an engineer, but access to this career in Iran was almost impossible for her, and she chose to study architecture as closest to engineering.
As a young girl, she started school but influenced by the talks of the neighbors her mother decided to stop her from going to school. Farasat wanted to continue study and she was helped by her uncle to enroll as a distance learning student so she was not required to be physically present at school anymore. She prepared for her exams alone at home and got excellent marks. After graduating from school, she started studying Architecture.
Farasat has been in Bulgaria for 10 months, reuniting with her husband, who has come to the country before her and currently works as an interpreter from Persian and Kurdish. He is a professional journalist who has fled from Iran because of some articles he authored. In Bulgaria Farasat started working in an architectural studio, where she has been working for several months.